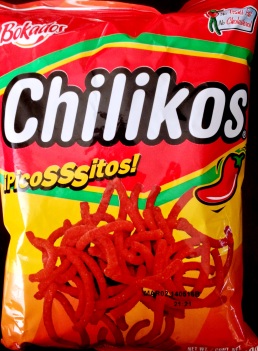 Wait!  What do we have here?  Have we tried these before?!

Survey says “NOPE!”  At least not technically that is.

However, one quick glance back at our recent reviews, and we realized that we actually had tried these before, they were just called Churritos, not Picosssitos!  And they were made be Barcel, not Bokados.

That being said, dump both the snacks into the same bowl, and see if you can tell them apart!  Visually, and texturally the two snacks were practically identical.  Both consisted of weird, little, skinny sticks!  They kind of resembled a cross between a wiggly-curved pretzel stick, and crunchy chow mein noodles!  Their texture was crispy and light, and bread-y; while apparently being made with corn?!  That being said, we could not really distinguish any of the actual corn flavor that we love.  Both snacks were very easy to devour by the handful, however neither encompassed very much depth, richness or character.

Where the snacks did differ a bit was in their spicy red seasoning.  Barcel’s ‘fuego’ seasoning consisted of the classical Mexican flavor combo of chili & lime.  While Bokado’s sticks were basically just chili.  The “spicy” chili flavor was not really spicy in this case, more like a harsh, unnaturally acidic burn.

Overall, we were not huge fans.  We would compliment Bokados on their uniquely shaped addition to the chip game, but apparently it’s actually not that unique!