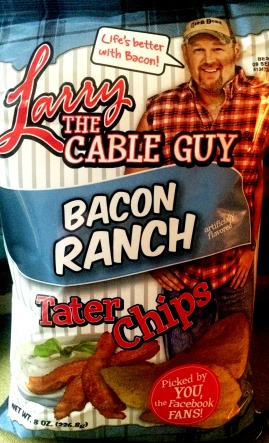 According to the big red circle Larry’s new Bacon Ranch flavored Tater Chips were “Picked by YOU, the Facebook FANS!”.  Now, we didn’t see the flavor list that Larry’s fans were choosing from (or maybe it was submissions…), either way – Bacon Ranch seems a little on the safe, or predictable side, or maybe mainstream.  Personally we actually liked Larry’s other new 2015 Summer flavor more than Bacon Ranch –  Hollar-Peño Popper!

Correct us if we are wrong but does Mr. Cable Guy release two new Tater Chip flavors every summer?!  He’s a hard flavor tater working man!  Let’s go back through his flavor progression over the past four years.  Season 1 (initial release – four flavors): Cheese Burger, Barbeque Rib, Fried Dill Pickle and Buffalo Wing.  A great introductory line-up, showing us all that Larry meant business with his bar food themed flavors!  Season 2: Pass the Darn Ketchup and Tater Salad.  You had us as potato salad flavored chips!!  Season 3: Chili Cheese Fries and Biscuits & Gravy!  That’s right, lip-smackingly game changing biscuits & gravy flavored potato chips!!  This season: Hollar-Peño Popper and Bacon Ranch.  And, like we’ve already said above, we are on team Hollar-Peño!  We see a theme here, and it appears to be that each summer we love one flavor, and we could leave the other.  But, if that’s what it takes to find one really great flavor each summer, we’ll take it no problem!

Quick question before we delve into what we thought about these chips.  Why is it that every chip brand seems to have blue-ish-green and red specs in their ranch seasoning blend?!  Seriously, we have no idea!  Low and behold, guess what we found scattered all over Larry’s Bacon Ranch Tater Chips?  That’s right, blue-ish-green and red flecks of flavor.  As for the taste of this colorful seasoning – some of our tasters thought these chips were pretty lackluster,  describing them using such words as adequate and uninspired, (one taster used that worst two letter word in the English language O.K.!!).  While other tasters thought the Tater Chips were actually above-average in taste, but slipping on flavor accuracy.  The bacon aspect was pretty much just a splash of smoke, no real fatty-porky essence or depth.  Subtle would be a good description of it.  And the ranch flavor half brought plenty of garlic to the party, but seemed to have forgotten to pick up its buddies creamy and tangy along the way!  We really appreciated how savory the flavor combo was, but in the end, just too timid of execution.  We expected a more commanding combination!  And what we got was Larry’s Garlic Smoke Tater Chips!!

As for Larry’s potato chips, they are on the thinner side, and many of the chips still have their skins on them.  Really, they are just good old, “real” potato chips with a crispy-soft crunch.  The chips provide the prerequisite delicious potato flavor, and a perfect delivery device for all of Larry’s unique seasonings.  We will see you next summer Larry!

Chips provided to Chip Review by KLN  for review