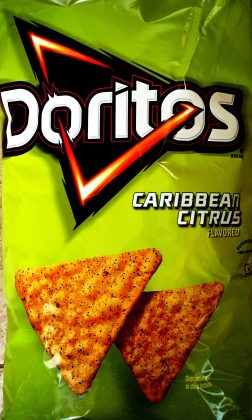 Are these really the first new chips from Doritos this year?  COME’ON DORITOS, what is going on?  That’s some real chip slacking!  Oh, and just in case you are keeping track (like we do), here at C.R. we do not exactly count their “new” line of Doritos Mix snack mixtures as a new product this year (although they did technically come out this year).

You want to know what?  We are not going to count these chips as brand new Doritos either!  Yeah, that is right, we are getting a bit salty here – why you ask??  Oh, well, because Doritos hasn’t released any all new chips lately of course!

Alright, let us explain.  First, we can go as far as to call Doritos Caribbean Citrus half new chips, but that is definitely as far as we can go.  Half new because Doritos has never put this seasoning blend onto their regular Doritos tortilla chips before (it has been on their JACKED chips thought).  Also half new, because they have technically changed the name up and removed the original “jerk” aspect.  We’re guessing that they removed this portion of the description/name because 1) it did not quite live up to flavor qualifications or execution, and 2) jerks aren’t very nice!

Ok, we can quit beating around the bush here.  These “new” Doritos Caribbean Citrus are just a reboot of their JACKED Test Flavor: 404 released a couple of years ago (they had us fooled too, until we tasted them).  As some of you may, or may not recall, the final flavor reveal named the 404’s – Caribbean Citrus Jerk.  This test flavor was a true mystery when it first came out.  People were describing it as everything from curry, to Asian wings, to Cajun crawfish, to even Samosa Girl Scout cookies!  Of course we knew what the flavor was right from the get go…..”Our money is on (actually we are not willing to put our money on anything for these ones, that’s right Doritos you stumped us!).  However, if we were using your money, we may be willing to put some on: sweet garlic mojo!!  Or, maybe lime splashed chorizo tacos? Spicy chile margherita? Sweet and Sour? Sweet & Sour Chile?  Oh heck, we’re sticking with 404.”

We aren’t going to bother writing anything new about this flavor.  If Doritos can reuse their flavors, we can reuse our words.  Let’s just take a look at what we wrote two years ago.

As for Test Flavor: 404, well, let’s just say that this bag’s ingredients made us think we were going to love them the most!  But, what they really ended up tasting like, versus what we expected them to taste like, were not one in the same.  Yet, despite still tasting pretty lip-smacking, we really cannot pinpoint what we were tasting.  Let’s break down what we thought: 1) Loads of sweet citrus notes propelled from the bag when we opened it.  The aroma really accentuates the true corn tortilla essence.  2) CITRUS – lime and orange.  3) The sweetness is evident, but not overwhelming.  Very complimentary to the citrus.  4) The more JACKED chips we ate, the more pronounced, and powerful, the citrus flavor really became.  5) garlic.  When combined with the sweet citrus, evoked thoughts of Asian sweet and sour.  6) Light vinegar splash added some depth.  7) The real stumper was the indecipherable combination of generically defined “spices”.  It definitely did not help matters for distinguishing what we were tasting, but it did help us to not stop eating!  8) Have we mentioned citrus?!

In the end, we think that Doritos should have just actually done a reboot of their Mojo Criollo flavor from their Rollitos line of chips….We like those A LOT more.  We’ve decided to give Doritos “new” Caribbean Citrus one-quarter less Chip Rating due to the fact that they tricked us into thinking that we were going to be trying new chips!  And, honestly, the flavor may have worked better on their JACKED style tortilla chips better.