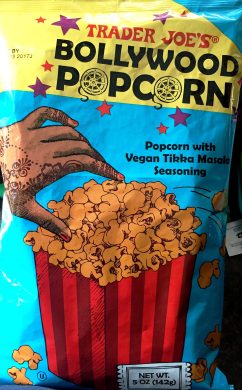 For our next trick a tandem of TJ’s totally tasty treats.  Trader Joe’s cracks the list for the third year running.  Way to go Joe!!  It couldn’t have happen to a finer grocery store guy.  We sure could go for a big bowl of Bollywood Popcorn AND Somewhat Spicy Dill flavored potato chips right about now.

Is Tikka Masala the new BBQ or Cheddar?  Most likely not, but the Indian flavor does seem to be picking up some traction, as Trader Joe’s Bollywood Popcorn is the second Tikka Masala flavored snack that we have reviewed in as many months.  We can tell you without a doubt, that TJ’s snack version of the flavor, is easily the far superior one!

Every year Trader Joe’s always seems to knock a couple of their new snacks out of the park – last year we loved their Ghost Pepper Lattice Cut Kettle Cooked Potato Chips and the Partially Popped Popcorn …with Butter & Sea Salt, and two years ago it was their Potato Chips with South African Style Seasoning, this year we already praised their Somewhat Spicy Dill flavored Kettle Cooked Potato Chips – and it is fair to say that TJ’s Bollywood Popcorn has joined this lip-smacking list!

To accurately describe to you what exactly this popcorn tastes like we would have to have a much better understanding of Indian cuisine overall.  So, rather that do a half-popped job with that we are just going to plagiarize a few key descriptive words from What’s Good at Trader Joe’s review:

“a big, aromatic cloud of cloves and cumin and garam masala, which quickly laid to rest how potent the seasoning might be on a simple popcorn base… Potent is an understatement. My goodness. The best way I can explain it is a “happy heat.” …it builds slowly but surely, with a lot of warmth, and it just lingers on and on, but it’s never overbearing.”

We couldn’t have said it any better ourselves, and so we didn’t.  The popcorn is amazingly fragrant, dusted perfectly with those exotic spices.  And it certainly brings a slightly spicy, steady warmth after a few handfuls.  But above all else, we would describe the popcorn as balanced, and extremely SAVORY.  We just loved it!  If you like popcorn, then you owe it to yourself to give this stuff a try!! 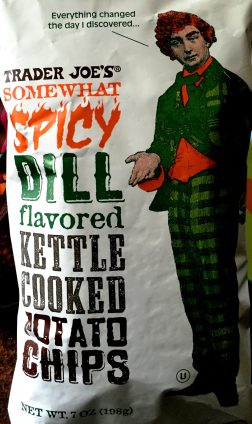 We really appreciate how Trader Joe’s just loves keeping their packaging light, and a little quirky!  With these latest chips we get an orange haired young chap, who is apparently dressed for his St. Patty’s Day party or something, and is reflecting to himself – “Everything changed the day I discovered…”
We have to assume that this reflection is in regards to the day he discovered these chips.

Well, we’re not going to go so far as to say that everything changed the day that we discovered….. these Somewhat Spicy Dill flavored Kettle Cooked Potato Chips.  But, we can guess that things would certainly change for us if we wore an outfit such as the one this guys is wearing!

The Spicy Dill variety is not necessarily a new combo in the chip flavor game, but it is one that has not really picked up steam with the “big” brand companies.  Most of the chip companies willing to venture into this tangy flavor realm seem to be a bit more of the independent sort.

Most certainly our all-time favorites from this flavor combo variety are Grippo’s Hot Dill Pickle Potato Chips.  It is very likely that these are no longer available, but our memories of these herbal-y-spicy thin cut potato chips were forever live on!  We are also huge fans of Zapp’s, and Deep River’s potato chip versions.  We are happy to report that Trader Joe’s Somewhat Spicy rendition can be added to that list of favorite versions!

TJ’s medium-thin cut kettle cooked potato chips are fantastic!  Perfectly crispy, with just the right amount of mouth pleasing body.  We couldn’t really taste any potato flavor underneath the powerful seasoning blend, but that was just fine since that seasoning was a delicious recipe.

Joe’s seasoning recipe reminded us a lot of McClure’s Bloody Mary chips.  First, comes the tongue tingling spicy acidic-chile burn.  The acidic burn attacks the throat and the nasal cavity sort of harshly, but then quickly subdues to the moderate chile burn that resides in the mouth!  The one-two spicy punch.  The fragrant dill herbal notes flutter there in the background, bringing thoughts of pickles to the mind.  Garlic is also very present.

The flavor combo works deliciously well!  If you are a fan of spicy chips, or pickle flavored chips, then we’re fairly confident that you would be fans of these as well.  Make sure to let us know your comments below regarding these chips, or the day everything changed when you discovered…..what?”

For another take check out What’s Good at Trader Joe’s review.

This is some seriously heavily coated popcorn kernels, they have some weight to them. 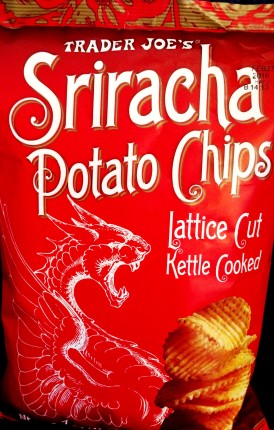 As we snatched that bright red, hopefully promising, bag of kettle cooked potato chips from off the store shelf we paused for a second, and realized that it had been quite a long time between Trader Joe’s visits.  Which made us sad.  Shame on us Chip Review.  SHAME ON US!  Luckily, TJ’s delicious Sriracha chips turned our frowns upside down, and made us happy!

You know how we know that it has been a long time since our last TJ’s visit?  Well, this visit was our first time seeing the lattice cut sriracha flavored potato chips (and it’s not like we somehow over looked the bold, electric-red bag of sriracha flavored chips).  And we know that they have been available for a while now as they were SPOTTED over two months ago on The Impulsive Buy, and very positively reviewed nearly just as long ago by What’s Good at Trader Joe’s?

First of all, can we just point out the ferocious looking creature who appears as though it is about to smash a giant stack of lattice cut potato chips.  According to our younger chip reviewers this creature is obviously a dragon cat; and apparently there are plenty of examples of this out there on the internets!  Quite frankly, we don’t get it.  We don’t understand the correlation between the uber popular Thai hot sauce, and the winged feline?!?  Now, if TJ’s would have gone with a cat rooster, or a rooster dragon, now that is something we would associate with sriracha!  But what do we know, maybe dragon cats are popular in Thailand?

Trader Joe’s Sriracha Lattice Cut Kettle Cooked Potato Chips are lip-smackingly tasty…..but we feel like we may have already told you that….last year!  Okay, while technically we are reviewing them for the very first time, we sort of feel like we reviewed, and praised, these chips last year, only they were called Ghost Pepper Lattice Cut Kettle Cooked Potato Chips…  Yes, we know that those were different chips (at least we are supposed to think they were), but hear us out here!

Touch of sweet, good dash of salt, lots of vegetal and fruity chili pepper notes, and we love-love-loved the splash of tangy vinegar and citric acid.  Of course there is some onion and garlic are in there (mandatory in every seasoning it seems)….That’s right, we said it, there is a touch of heat that alludes to the threat of tongue burning heat but never really gets anywhere near it.  In fact, the heat doesn’t even really build after many repeat visits to the delicious chip bag!  That is not to say that there is no heat whatsoever because there is a bit of tongue tickle, just nothing to the extent that we would have expected from the ghost pepper!

The above italics were taken straight from our Ghost Pepper review, however for the the most part, a large portion of these descriptions could be used to describe Trader Joe’s Sriracha chips.  We would be willing to bet A LOT of $$$ that TJ’s did not start from scratch with their sriracha recipe, and much of the inspiration for derived from the ghost pepper recipe!  Is this a bad thing?  Certainly not, especially when the ghost pepper chips were so lip-smacking!!

Overall, we liked these sriracha chips quite a bit.  If you like sriracha hot sauce, and you like crispy potato chips, then you would certainly like these.  Sriracha may not yet be as popular of a flavor as say nacho cheese, or barbeque, but it is sure making a run for it, and as far as the dozen or so sriracha flavored chips we have tried thus far, these are definitely somewhere in the top 5!

These are our thoughts, agree or disagree, make sure to let us know! 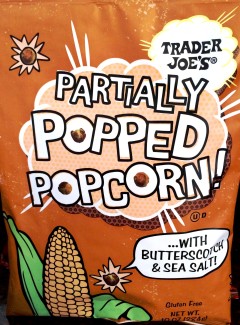