Well Chip Review readers, that wraps things up for another great year of chip reviewing!

We would like to say that it has been a true pleasure sharing our thoughts with all of you as we chomped our way through hundreds of bags, and countless calories this past year 🙂  Thanks to all of you who follow us each and every day.  We appreciate it, and we wouldn’t be here without each and everyone of you!!  Also, a very special thanks to those snack companies who graciously provided their products for us to review.  It’s a tough job (especially for our waistlines), but someone has got to do it.

Below is our list of the Top 25 Chips we reviewed this year.  Agree or disagree, we’d love to hear it!!

**Chip Review’s Top 25 list of the Year consists of chips that we tasted and reviewed during the 2013 calendar year for the first time.  The chips are not necessarily new to the industry, but they were new to Chip Review in 2013!

Uniquely complex, and plain old delicious!  And, only after a little bit of yelling and stomping, and even some name calling, the dust settled and we here at Chip Review agreed that the gent on the right must be none other than Sweet Chili himself, and that would make Mr. Red Pepper his sidekick on the left.  Truly a dynamic duo worthy of our Top 25!!

Apparently, some time ago, we here at Chip Review already had the pleasure of tasting Tyrrell’s Sweet Chili and Red Pepper Potato Crisps.  The bag above on the left, must be some older rendition that Tyrrell’s released years ago.  While the bag on the right displays one of the Tyrrell’s timeless black and white photos.  Since we cannot find any notes, or rating for these crisps, and none of us can even remember tasting them at all, we will approach and review them as if it was for the very first time.

First, and foremost, we must admit that there was a bit of a disagreement here at Chip Review about who each of the dapper gentlemen were gracing the front of the potato crisp bag.  In the end, after a bit of yelling and stomping, and even name calling, the dust settled and we agreed that the gent on the right must be none other than Sweet Chili himself, and that would make Mr. Red Pepper his sidekick on the left.

As for the potato crisps themselves, well, it did not take more than a couple of handfuls for us to determine that Tyrrell’s had created a uniquely complex, and tasty flavor combination with their Sweet Chili & Red Pepper.  In fact, it was easy for us to declare these as the best Tyrrell’s potato crisps that we had ever tasted!  One miniscule issue we did initially have with the crisps was the flavor name.  To us, it seemed a bit redundant to say both chili and pepper flavored, because quite often these two words are referring to the same thing.  Maybe with a tad more clarification, or description, we would have understood that the pepper in the name was referring to peppercorns and flakes, and the chili was referring to the chili pepper?  Minor qualm, but one that we felt needed addressing.

Getting back to that uniquely complex and tasty flavor combo we mentioned above.  We should just say from the get go, that we are not going to do the description of this flavor the justice that it deserves.  The complexity of this multilfaceted flavor bonanza was quite simply amazing.  From the very get go we tasted the sweet, the spicy chili, and the aromatic and zippy pepper punch.  The flavor seemed to hit each taste bud with every chip.  Beyond the expected seasoning notes, we also tasted loads of garlic, and then lots of other intricate flavors that we could not pinpoint; but one glance to the ingredients list and we saw there there was also anise, ginger, basil and white pepper – WOW!  Can we just point out the spicy spectrum that these chips deliver – they include ginger, garlic, white pepper, jalapeno chili pepper, cayenne pepper, and red pepper.

Lastly, it took us a while to figure it out, but we finally realized that these Sweet Chili and Red Pepper crisps, kind of remind us of a cross between Kettle Brand’s Spicy Thai Potato Chips, and Mackie’s of Scotland Scotch Bonnet Potato Crisps. 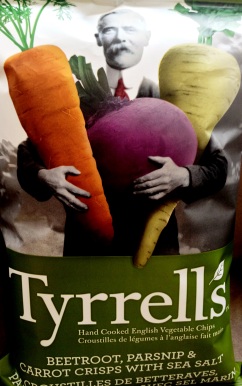 We are going to keep this review short and sweet, sort of like the deep rich magenta colored beet crisps in this bag….

Why, why, why, why would someone choose vegetable crisps over traditionally delicious potato crisps??  Your guess is as good as ours.  And, while we are nitpicking, are potatoes not vegetables themselves?  They are not fruit?  Definitely not meat?  Yep, potatoes are technically considered vegetables, so to specifically call these carrots, beets and parsnips, ‘vegetable crisps’ is sort of doing an injustice to potatoes.  As you may or may not know, we have not reviewed many vegetable chips on our site, and the reason is simple, we don’t very much like them.

We know Tyrrell’s English Crisps are relatively new to our North American shores, but why anyone would try to compete against the vegetable chip kings of the West (Terra) is beyond us….?

Their are two things we should note regarding these vegetable crisps:

First of all, we’ve made a point of Tyrrell’s potato crisps’ texture in the past, but these vegetable crisps are a whole new dilemma.  Each of the three vegetables have their own slightly different texture; none of which are necessarily pleasing.  Visually, we cannot really tell the difference between the parsnip and carrot crisps, and unfortunately they take up the majority of the bag.

Secondly, the beet crisps exude a strong interplay between sweet and (extremely) salty, that was the only welcome surprise we could find among these crisps.  The texture, color and richness somehow mimic the texture and flavor of some overcooked, crispy pieces of bacon.  Now, isn’t that ironic – vegetable chips that taste a bit like the exact opposite, the anti-vegetable – bacon!

So, in the end, if you like vegetable chips then maybe you would like Tyrrell’s version, because in our opinion, they are just like all the rest. 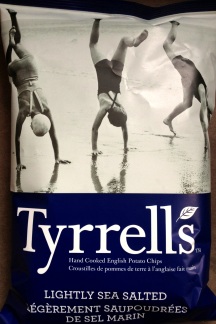 Another “plain” potato chip?  Yep, that’s right, we are on a roll here.  Like we mentioned earlier, we thought it was imperative to try a wide range of samples if we were going to try and review “plain” potato chips subjectively.

First off, can we just say how much we love Tyrrell’s bag design.  The timeless black and white photographs that grace the face of their bags are always clever, and often funny.  Our favorite of the lot is probably the Sea Salt & Cracked Black Pepper – we’ll let the picture speak for itself.

Tyrrell’s chips are rather large, and almost all of them consisted of whole, intact slices but in varying kinds of shapes.  In addition each chip seemed to have a dark outer ring around its edge, and appeared as though the skin had been left on and each potato slice was an entire cross section from the potato.  The potato chip’s flavor was very unique.  We can’t quite pinpoint what it was exactly, obviously some combination of the potatoes and oil used, but the flavor really was unlike any other we can remember tasting.  In fact, the chips kind of reminded us of fried state fair food (and what’s wrong with that?).

So, what’s actually wrong with these chips then?  Well, that pretty much can be summed up with one word: CRUNCH!!!  To say these chips were quite a bit harder than your average kettle style cooked chip – CRUNCH – would be a giant understatement.  Their density – CRUNCH – was very unappealing, and – CRUNCH – reminded us a lot of sweet potato chips.  One Chip Reviewer – CRUNCH – assumed that the chips were stale, and kept asking if the chips could have expired.  Our teeth still hurt, hope that clarifies it for you.

A few days ago we mentioned that due to our unfamiliarity of, and to better help acquaint ourselves with, the potato crisp CLASSIC FLAVOR of the UK that is Mature Cheddar & Onion, we decided it was best for our taste buds to confront two different companies’ versions of the classic flavor combo during the same tasting.  In other words, dueling UK cheddar and onion crisps – bring’em on!!

We’ve reviewed a few different flavors of Tyrrell’s Potato Crisps in the last few months, and so far, so good.  With these Mature Cheddar & Chives Crisps Tyrrell’s gives us some very fresh and vibrant flavored crisps.  The inclusion of chives, in addition to onion, adds another layer of flavor that reminds us just a bit of good sour cream and onion chips.  The tangy cheddar cheese delivers a nice amount of sour salt, but we don’t really get any of that earthy, aged funk that is often associated with ‘mature’ cheeses.  Plain and simple, we liked the seasoning of these crisps quite a bit.

We were not as thrilled with the potato crisps themselves in this bag.  In our opinion their crunch was off….  The dense, thin cut crisps just seemed liked they had been triple dipped in the kettle oil, which resulted in a heavy, tooth cracking crunch of a crisp.  The potato’s natural flavor was good, but many of the crisps were broken into smaller pieces, diminishing the eating experience ever so slightly.

Tyrrell’s Mature Cheddar & Chives are good crisps overall, definitely better than a lot that’s out in the marketplace today, but we’re not going to gush over them the same way we did recently for their wholly unique  Worcestershire Sauce & Sundried Tomato flavored crisps.

So, in the end, who has the better Cheddar & Onion Crisps – Scotland or England?  Let’s just say we’d enjoy a bag from either, and leave it at that!