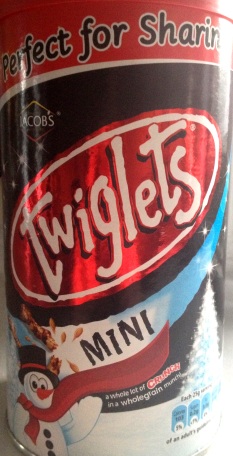 For the very first time in the long illustrious career of Chip Review, we are utterly and completely speechless.  Honestly, we don’t know what to say about these.  Josh at Crisp Nation told us that he would be including these amongst our wonderful array of British snacks, and that they are a classic, must try.  Well, we are glad that we can say that we’ve tried them, but we don’t know what else to say about them…..

Twiglets?  Twiglets…?  We get it, they are shaped liked little twigs.  So, if this formula actually works, we can simply add a ‘let’ to the end of any noun, and “voila”, we have a smaller version of the standard.  Piglet = little pig.  Chiplet = little chip?  Maybe not, but Twiglet is definitely catchy.

Apparently, Twiglets have been described as tasting like marmite, which according to Wikipedia “is a sticky, dark brown food paste with a distinctive, powerful flavour, which is extremely salty.”  Yet, another thing we are completely unfamiliar with.  All we have to say about Twiglets are that their flavor is unique, and we found them a bit off-putting at first (in fact, some of us, did not give them a second chance).  However, once we got past their initial burnt, salty, bitter flavor, we found that Twiglets’ light and crunchy wheat based texture, was actually rather addicting.

So, if you happen to be overseas and spot these British classics, give them a shot, or if you already have, tell us your thoughts.  As always we would love to hear what you think.  Agree or disagree.  Let us know.

Twiglets provided to Chip Review from our good friend Josh at Crisp Nation.