Food, should taste good….don’t you think?

Just the other day we were asking ourselves, when do you think we will finally see some all natural chive flavored multigrain pita puffs?  Today, that question is answered.

These are a delight to crunch on.

The snack is certainly more about the pita puffs themselves than any chive seasoning.

Light and airy and crispy, with just a touch of sweetness recognizable on the tail end, from the inclusion of some honey.

F.S.T.G. keeps it really simple with the seasoning, which results in an extremely subtle chive flavor (again, letting the puffs be the stars of the show).  In fact, and we’re not joking around here, all there is to the seasoning is chive, and every chip’s BFF salt.

Are you a fan of cocoa flavored things?  What about crunchy pita chips?  Well, what if we told you that Stacy’s Pita Chips has decided to put the two together?  How does that sound…?

Yeah, the combination does not feel very natural or organic to us either.  Cocoa, and pita chips, hmmm….Limited Edition sounds about right.

Surprisingly enough we have actually tried more than a dozen different Chocolate / Cocoa flavored crunchy snacks over the years.  Some have actually been quite deliciously impressive, while others have been downright disgusting.

Stacy’s new Simply Cocoa Pita Chips all into the upper tier of those cocoa snacks.  They really aren’t half bad.

A hefty dusting of ultra dark brown cocoa powder liberally coated each and everyone of the pita chips.

We really appreciated how the cocoa chips were not overly sweet, and obviously Stacy did not feel it necessary to sugar them up for us. 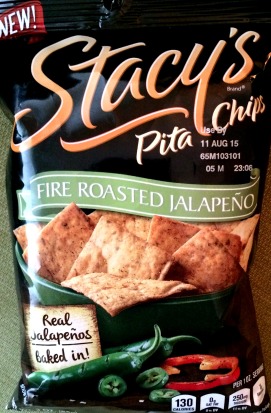 It seems as though Food Should Taste Good will never be satisfied until they have tried their hand at every flavor in the world!  Which poses the question, “are all flavors fair game, and meant to be transformed into a chip/puff/snack of some kind?”  We think the answer to that is probably not, but we can’t blame them for trying; plus we always love trying new flavors!!

Pesto is a fresh, chunky, versatile, Italian sauce that screams summer time to us!  It is traditionally, or commonly, made with basil, pine nuts, garlic, olive oil and parmesan cheese.  It is a tasty combination of flavors that works very well with many types of dishes (especially pasta, meats and potatoes..).  According to Wikipedia “the name is the contracted past participle of the Genoese word pestâ (Italian: pestare), which means to pound, to crush, in reference to the original method of preparation, with marble mortar and wooden pestle.”

For one reason or another, not very many chip companies have produced pesto flavored chips.  Our theory (and opinion actually) behind the reasoning for that is that pesto is too powerful of a flavor.  Most of us at Chip Review love pesto, but it can very easily overpower whatever you are serving it with.  It sometimes doesn’t play well with light and crispy chips.  Its bold presence overwhelms the snack, and eventually overwhelms the palette as well.  These Pita Puffs are only the third pesto flavored chips that we have ever tried, and there was probably a reason why the other two brands both included mozzarella cheese among the ingredients.  The cheese helped, at least a little bit, to smooth and tame the powerfully, pungent and herbal flavors.

All that being said, if you like to try new flavors, and textures (as we do), then you will definitely get a kick out of these!  According to the front of the bag, Food Should Taste Good’s pesto flavor recipe includes: basil, garlic and onion.  Onion is a new ingredient to pesto for us, and not one we think really adds much to the classic recipe.  The recipe is powerful enough without adding another formidable flavor presence to the mix.  Food Should Taste Good’s pesto seasoning definitely evokes thoughts of the real thing.  Bright, bold, blasts of basil, combined with sharp, almost spicy, layers of garlic.  Flavor packed for sure!

The Pita Puffs themselves are a new, fun, and addictive, crunchy snack.  Everyone agreed that they were very difficult to stop eating (which is why none of us really did).  They are exactly what you would expect them to be.  Little one inch by one inch pita squares that have been “puffed”, and left with a hollow interior.  They are somewhat reminiscent of the good old Doritos 3D snack, only slightly denser, and with a multigrain flavor.

In the end, we enjoyed crunching on the Pita Puffs more than we actually loved their pesto flavor.  More than anything, we just love Food Should Taste Good’s decision to push themselves, and continually add unique flavors and new textures to their impressive line-up.

It was slightly over one year ago that we stumbled upon one of those rare surprises that made us smile with enjoyment after just one chip!!  Not necessarily because we had just tasted some of the greatest chips ever, but simply because they were much better than we were expecting!  Those chips were Simply Sprouted’s Way Better Snacks Simply So Sweet Chili Tortilla Chips, and they were delicious!

We stumbled upon Simply Sprouted’s latest, all-new creation just the other day, and once again we were quite surprised by both what we saw, and by what we tasted.  What we saw, were smoked Gouda flavored Pita-ahh chips and we were very intrigued.  Interested enough to grab the bag from the shelf and give them a whirl.  But what we tasted, well, let’s just say that surprise went in the wrong direction!

First, let’s discuss the positives of these playfully named pita chips.  The pita chips themselves are triangular shaped, like tortilla chips, but thick and sturdy like pita chips.  The captivating, milky white seasoning that liberally coats the chips explodes on the tongue with a heavy blast of very smoky Havarti cheese flavor.  Seriously, it is as if the pita chips have been dunked into a creamy cheese powder, or the powder has been spread on with a knife; and as soon as that cheese dust comes into contact with any moisture from your mouth it turns into a smooth, silky cheese sauce!

Lastly, based on the way these chips taste, they have got to be healthy.  Way Better Snacks appear to have a theme running through them, and yep, you guessed it, they use sprouted grains!  This particular recipe from Simply Sprouted, happens to contain both Red Fife, and Spelt.  Both, being “magical” ancient grains that are supposed to add loads of health benefits, along with, some great texture and flavor to the chips.  But, what exactly are sprouted grains? you ask.  According to Way Better Snacks website: “…seeds, grains and beans play an important role in a healthy diet, but their nutrients can be increased multifold through the process of germination. Germination releases enzymes specifically designed to start the seed on its way to becoming a plant, which in turn consolidate nutrients. Sprouted foods are high in fiber, helps neutralize and remove waste from the body, and some (like our Broccoli and Diakon Radish Seeds) even contain anticancer substances.”

In concept, Way Better Snacks’ sprouted grains sounded good to us, but at the end of the day, they also needed to taste good!  And unfortunately, these chips do not!!  In fact, more than one of our tasters actually said “yuck” after eating only one of the chips.  For starters, the triangular shaped pita chips had no real character to them.  Smooth, flat and quite texture-less.  Somehow the chips were brittle and delicate, but yet not light and crispy like other pita chips that we have enjoyed.  As the chips disintegrated into moisture absorbing, grainy powder, we found ourselves grasping for anything we could find to drink.

Lastly, and probably most regrettably, was that despite the chips’ initially intriguing smoked Gouda cheese seasoning, we swiftly realized that the seasoning blend was all but devoid of any salt!  How can a cheese flavored seasoning not include any salt!?!  What a disappointment, and failed opportunity, for a potentially delicious new flavor!

In the end, all we can really say about these new Pita-ahh Chips is that Simply Sprouted, we’ve had some way better snacks from you!