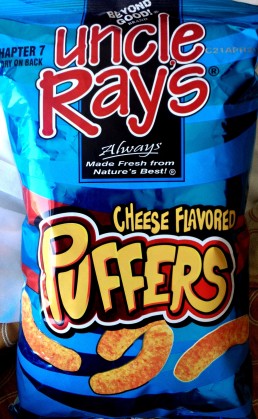 Uncle Ray to the rescue again!  Anytime we have a craving for some crunchy, salty snacks, we just call up good old Uncle Ray, and he’s always got something new we can try!

We’ve said it before, and we’ll say it again, we can only imagine what it would be like to have an Uncle Ray who made chips for a living!  Seriously, how cool would that be?!  While some kids may have grown up dreaming of having that uncle who played a professional sport for their favorite team, or that cool uncle who hung out with his movie star friends on the weekend, well that was not us!  We always dreamed of having that salty uncle who lets us walk the line of his potato chip (cheese puff) factory, and scoop handful upon handful of warm, fresh, crispy potato chips (cheese puffs) into our chip (puff) loving mouths!

**Funny side-note: on the back of Uncle Ray’s snack bags it appears that Uncle Ray likes to include a story from his past.  We think that he is trying to bestow some of his life lessons on us.  Free advice with good snacks?  Count us in.  Chapter 7 is a doozy regarding Uncle Ray’s Grandfather, and how he helps Ray steer clear of a dangerous habit before it even starts!  Isn’t that what grandpas are for?!?