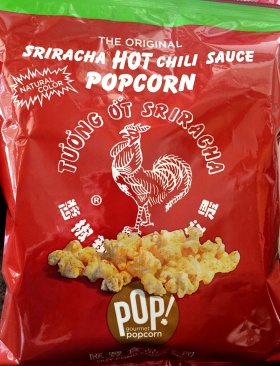 Pop! Gourmet and Huy Fong Productions present to you – The One, The Only, The Original-trailblazer – Sriracha Hot Chili Sauce Popcorn!!

By now, we have to assume that you are familiar with this uber popular, green capped, chili sauce. Let’s be honest, Huy Fong’s Sriracha Hot Chili Sauce is anywhere and everywhere!! In fact, we’re fairly certain that most people can’t even separate Huy Fong’s bright red, green capped, rooster gracing, bottle from Thailand’s Sriracha chili sauce.  Although companies other than Huy Fong do actually make sriracaha chili sauce, it seems as though the two are forever synonymous with one another.  Sort of like the way Kleenex is how many of us refer to facial tissue these days.  Huy Fong cornered the sriracha market, and capitalized on the deliciously red, Thai chili sauce – forever catapulting it into hot sauce stardom!!

All that being said, it wasn’t until relatively recently (and by that we mean about a year) that the trend of Sriracha flavored snacks really took off!  To date, we have tasted six different sriracha flavored snacks including these. And, for the most part we have really enjoyed the majority of them. Amazingly enough, this popcorn is the very first one to officially team up with Huy Fong’s famous green capped Sriracha Sauce (even though it is sort of obvious that J&D’s Sriracha Popcorn is not so subtly utilizing Huy Fong’s unmistakable bottle on their bag).

One final example of how engrained Huy Fong’s Sriracha Chili Sauce is in, at least our lives, would be the simple fact that we nearly walked right passed this popcorn in the grocery store today. Not because we didn’t notice it, but just because we saw the bright red bag, white rooster, green top and, said “oh, Sriracha?”  Luckily we did a double take and noticed that this was Huy Fong’s venture into popcornland with the help of Pop! Gourmet Popcorn.

This popcorn is really delicious!  D-e-l-i-c-i-o-u-s, delicious; but with a surprisingly subtle seasoning when compared directly against the real hot sauce.  Rather than actually tasting like popcorn coated with hot chili sauce, the seasoning tasted more like a sweetened, dehydrated, and more timid variation of those classic Sriracha flavors!  In fact, we would have liked a bit more of the funky chili pepper, and tart vinegar notes to mingle with the sweet, heat and garlic punch.  But, other than that, the flavors do a decent job of mimicking Sriracha.  A good level of red chili heat, plenty of potent garlic, lots and lots of sugar, decent salt level, with just a little bit of the actual chili pepper flavor, and vinegar.  The popcorn itself was fresh, crispy, not necessarily light, but more toothsome, and with a decently rich level of satisfyingly delicious oil.  Plain and simple, everyone was really happy with this popcorn. The same way everyone seems to always be always happy with Huy Fong’s Sriracha Hot Sauce.

P.S. – Raise of hands, how many of you out there knew that Sriracha was pronounced nothing like it is spelled?  That’s right, “I” before “R” except after “S” apparently…  Say it with us “SI-racha,” not “SREE-racha.”  According to Wikipedia, “It is named after the coastal city of Si Racha, in the Chonburi Prvince of Eastern Thailand.”  Which makes total sense, but why the additional ‘R”??  It makes no sense!  We like pronouncing Sriracha correctly, about as much as we like the pronunciation of a certain retired Green Bay Packer QB!!  Sorry Brett Favre, it is FAV-RE, not FARVE!!