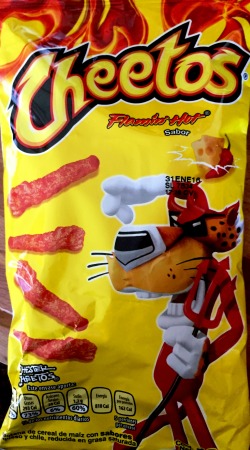 Have you ever tried something that is familiar to you in your everyday surroundings only to discover that the same thing elsewhere, in a different country for instance, is different?  A good example of this would be McDonalds.  We all know and recognize the mega fast food chain from those glowing golden arches, whether we are driving down our hometown street or thousands of miles away in some foreign land; the only thing is although we may recognize it by sight, our taste buds tell us that something is different.  Not necessarily off, or less delicious (although sometimes this is true as well), but simply that this seemingly always recognizable thing is not what we are accustomed to.

Even prior to tasting these Cheetos we could have told you that they are not the standard U.S. version of Flamin’ Hot Cheetos.

The two bags are obviously visually different, despite sporting the same overall color scheme.  Our everyday bag of Flamin’ Hot Cheetos is broken up into three different color partitions, one orange, one red, one yellow – sort of like it is an official Flamin’ Hot flag.  Mexico’s version is predominantly yellow, Chester is sporting his devil look, and there are red and orange flames of fire along the very top edge.  Despite their visual differences, we also found this very yellow bag of Cheetos in among a shelf filled with other Mexican Frito Lay products, so we knew from the get go that we weren’t trying our same old every day Flamin’ Hot Cheetos.

As for the Flamin’ Hot Cheetos themselves, well, they are pretty darn frackin’ tasty!!  Really, really similar to our flawless iconic U.S. Flamin’ Hot Cheetos only, slightly………..yes, there’s that word again, DIFFERENT.   Luckily that this different does not equal bad in this case.  Mexico’s Flamin’ Hot Cheetos have a much more cheesy seasoning, that also delivers more of a lip puckering sour tang than the bold and powerful acidic burn that we are used to with our every day Flamin’ Hots.  They still deliver just enough heat to warrant a Midwestern sort of Flamin’ Hot, but not enough to really scare anyone, from anywhere, away.  The Mexican Cheetos also have a slightly softer, or lighter crunch – just not quite as crispy.  They still melt with the slightest touch of the tongue, and provide plenty of that mouth loving, rich and fatty texture.

For the most part, these are close enough to the originals that most anyone who tries them wouldn’t really think twice that they are trying anything other than the usual Flamin’ Hot Cheetos that they are used to.  But, if you are like us, you pay attention to you crunchy, salty and spicy snacks, and in that respect, there are a few differences  But, in the end, they are still lip-smackingly delicious!  In fact, we have no concerns about that unplanned future Mexico trip, and our ability to find some type of Flamin’ Hot Cheetos on the local store shelf.