Chips provided to Chip Review by Neal Brothers for review 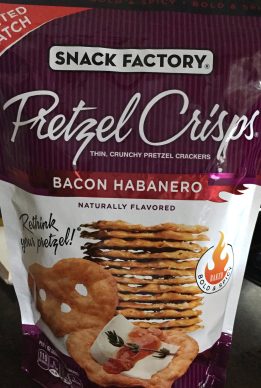 We have wanted to try these new Pretzel Crisps ever since The Impulsive Buy spotted them on Safeway shelves some four months ago….

In fact, these aren’t the first bacon habanero flavored chips that we have tried.  Last year Late July’s lip-smacking tortilla chips wowed us.

Let’s hope that this flavor combo becomes a new standard among all chip companies – because there could be nothing wrong with that!

The flavor is sort of reminiscent of barbeque seasoning, and we are surprised to see that Pretzel Crisps has never offered the classic flavor as an option….

Unfortunately, similar to Late July’s chips, these Pretzel Crisps suffer from a case of no-habanero-flavor-idous. Maybe, just maybe, we get a little bit of the chili flavor deep behind the bacon, and there is a subtle burn when all is said and done.

But really, this seasoning is all about the bacon.

The crisps are tasty, and salty bacon flavor works well with the pretzels (not quite as well as Late July’s corn-ful tortilla chips), but we still really wish that we could taste some habanero!

These chips have been out for a little while now, so we apologize that this review may be reaching many of you after you have already enjoyed yourself a few bags of Lay’s newest flavor to hit the market.

Okay, let’s get one thing out of the way right from the start.  Lay’s new Creamy Bacon Potato Salad potato chips are in deed quite tasty.  It did not take us very long to pound through this entire bag – but, whether or not that crazy chip chomping action was due to our taste buds enjoying what we were throwing their way, or the fact that they were bewildered by the flavor name, in comparison to what they were actually tasting – is unknown…?  Most likely, a little of both!

We would like to start out this review by reiterating Matt Linder’s spot-on thoughts regarding the flavor validity of Lay’s newbies in his review.  He mentions that “…if you’re expecting a flavor even remotely resembling actual potato salad, you’re going to be disappointed.”   Truer words regarding these chips have never been spoken.  So, if potato salad is what your heart yearns for, we would suggest you crunch elsewhere, and perhaps try Larry The Cable Guy’s Tater Salad Potato Chips.  As we recall his chips delivered much more of that classic fragrant mustard-y punch, as well as, some deliciously sharp wafts of vinegar that puckered our nasal cavities.  Larry may not have any bacon in his recipe, but we’re pretty sure he would have no qualms with you crumbling some of your own all over his fried taters!

Linder goes on to say in his review that “Creamy Bacon Potato Salad” has a nice ring to it from a marketing perspective, but a more accurate description of these chips would be “Sour Cream and Onion with Bacon,” because that’s exactly what they taste like. And that’s not a bad thing, in fact it’s quite brilliant, and I’m almost amazed someone hasn’t tried it before Lay’s.”  Well, to that we say, Matt you need to get your hands on some of Ruffles Sour Cream ‘N Bacon Potato Chips.  Because, you are right, they are amazing!  We would go one step further in our flavor description and say that Lay’s Creamy Bacon Potato Salad chips taste like sour cream, onion, bacon, as well as, cheddar cheese.  In other words, as if they were stolen right off of the appetizer section from practically every bar across this great country of ours!

In the end these chips are really just another addition (albeit a tasty one) to the The Works / Loaded Potato flavor family.  We’re not exactly sure why Lay’s is trying to pull a fast one over on us here?  We already had to scold Pringles earlier this week for trying to selling us on Cheesy Quesadilla flavored potato crisps that didn’t include ANY ACTUAL CHEESE among the ingredients!?!  If Lay’s would have just spilled the beans and admitted the truth to us right from the get go then maybe this snack relationship could have worked.  But, instead we had to resort to scooping up mom’s classic potato salad using Lay’s new chips!  We can admit it though, Lay’s bacon flavor did add a nice touch to the combination!!

So, if you have no issues with flavor accuracy, and you go into one of these bags knowing ahead of time that you will not be tasting potato salad, then by all means give these chips a whirl because they are cheesy, slightly sour cream and onion-y, definitely bacon-y, and certainly tasty!

Bacon and Cheddar.  Quite possibly as classic of culinary combination as peanut butter and jelly.  And certainly just as delicious.

We’ve tried A LOT of bacon cheddar flavored snacks over the years.  But, looking back we were very surprised to find that we didn’t love very many of them.

The same cannot be said for Chef’s Shoppe’s Bacon Cheddar Popcorn – this stuff is lip-smacking!  Then again, should we have even doubted this popcorn?  You may remember Chef’s Shoppe from such amazing “A” list hits as Sriracha-Cheese and Spicy Beer Cheese – both easily make our Top Popcorn list of all-time.  In other words, Chef’s Shoppe makes such delicious popcorn that they can even take a flavor combination that we apparently do not like in snack form very much, and turn it into a real lip-smacking winner!

First of all, this popcorn has real bacon bits in it!  No, we’re not talking about “real” bacon like Bacos, we’re talking about broken up pieces of deliciously fatty bacon!  And, the result is of course…..loads of real bacon flavor!  Crispy, porky, salty, slightly smoky, delicious bacon!

Secondly, our taste buds are shockingly impressed by just how super salty this stuff is!  Seriously, we had to apply Chapstick at least three times just while taste testing the popcorn!  A liberal yellow cheddar cheese dusting provided a delicious level of creaminess, a dash of tang, and of course that healthy dosage, or two, or three, of SALT!!

So, there you have it.  If you are like us and love bacon & cheddar pretty much anything than you will be happy to know that this popcorn is the real tasty deal!

Popcorn provided to Chip Review by J & V for review 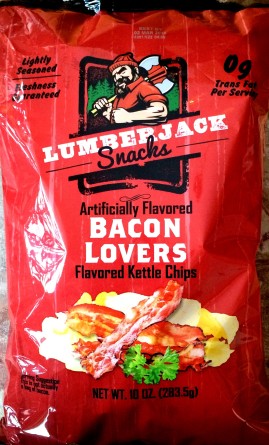 From the back of the bag:

HEY. JACK! HOW’S ABOUT KEEPING TWO HANDS ON THAT AXE?

It’s happened a million times.  You get your mitt caught in a potato party like the one you’ve got here, and it’s pretty hard to go back to work.  Of course, if you were sixty feet up a knotty pine, and it had to come down before you did, you might think twice about chopping before chomping.  Anyhow, we raise an axe to the men who inspired these ruggedly crisp chips – guys who risked life and, well, limb, to get the job done.  Salute them yourself by diving in with both fists.  Goodness knows we will.

Okay…..  Well, we may not quite understand exactly what the Lumberjack Team is trying to convey to us with the above statement….we’re thinking they are saying that we have been invited to some type of potato party that is being hosted by Paul Bunyan?!?!  Again, we’re not exactly sure.

We discovered these thick-cut, north woods, kettle cooked potato chips on a recent trip up to Paul Bunyan’s original hometown of Bemidji, Minnesota (also the original hometown of a couple of us here at Chip Review).  How could we not be pleasantly surprised by the sight of a new bacon flavored potato chip themed after our old hometown high school mascot – The Lumberjacks!!  That’s right, we never painted our faces green, and held up big signs telling the world that #23 is the best player ever!!  No, we put on our black and red flannel button up shirts, grew our beards, and carried our double edged axes to the arena!!  Ok, obviously the axes were fake, and we’re guessing that schools don’t even allow the fake ones into sporting events any more.  Plus, we couldn’t actually grow real beards so we would just rub Vaseline onto our faces and coat them with coffee grounds (it did the trick).  Long story short, these Lumberjack themed chips had an immediate connection  with some of us here at Chip Review, and although we may not fully understand what the Lumberjack Snacks Team is trying to tell us on the back of the bag, we do wear plaid shirts, grow beards, and of course enjoy potato chips from time to time.

These are pretty tasty chips.  They DO NOT taste anything like real bacon, but they are tasty nonetheless.  In a blind taste test, we are more than certain that we would have called these were extra smoky, slightly sweet, barbecue chips.  In fact, everyone who tasted these chips described them as barbecue flavored chips.  The artificial bacon flavor was just missing any level of rich and fatty and salty pork essence.  Instead the seasoning seemed to really focus on smoke and paprika and sugar – which simply made us think of BBQ chips, and not bacon.  That being said, the seasoning blend was pretty well balanced, if a touch overly smoky – but we prefer that over overly sweet.

The kettle cooked potato chips were on the thicker end of the spectrum.  They encompassed that usual sturdy kettle cooked crunch, and a neutral potato flavor that let the seasoning do most of the flavor talking.  Overall, they were more than acceptable kettle chips, that we’re pretty sure most lumberjacks would also enjoy – even the ones who are 63 axe handles high, with their feet on the ground and their head in the sky!! 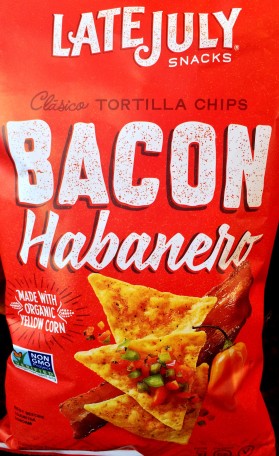 You got our attention with ‘bacon’, and you got our hard earned dough with ‘habanero’.  We knew we had to have these chips the very first time we saw them, plus we knew that there could be no way that they weren’t lip-smackingly delicious!  Our only suggestion to Late July would be to sprinkle the habanero seasoning shaker a few more times before sealing up those bags, because the only thing keeping these chips from being “A-list” status is their too subtle habanero presence.

What do you get when a company that apparently specializes in, or focuses on, pickles decides to try their hand at some bacon cheddar flavored popcorn?  Well, some surprisingly decent tasting popcorn!  Especially when compared to either of the last two bacon cheddar flavored popcorn varieties that we reviewed – Old Dutch – Cheddar Bacon Popcorn and Trader Joe’s – Baconesque White Cheddar Popcorn.

Van Holten’s popcorn encompassed what can only be described as a surprisingly “real” bacon essence.  More than just a singular smokey layer, the seasoning delivered a rich, fatty, almost meaty pork presence.

Plenty of creamy cheddar cheese powder amply covered VH’s full, fluffy popcorn kernels.  We wish that the cheese carried more of a cheddar funk flavor, and was saltier, but we had to settle with smooth and creamy.

Lastly, can we just point out how happy Mr. Bacon Man is holding that large, white, fluffy popcorn kernel.  He wouldn’t be so happy if he knew what we would do with him if we met him!!  Mmmmmm bacon!!