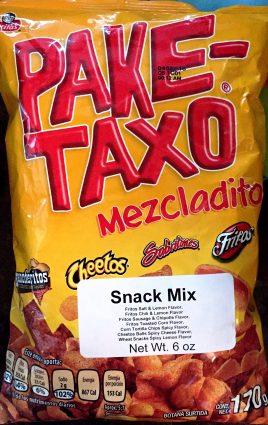 And yet another pretty great Frito Lay Mexico find from our favorite Illinois Tollway Oasis!

We had to dig deep into the archives to make sure that these Pake-Taxo were not just another reboot Sabrita Mix of sorts, but as much as they may be similar to Sabritas Fiesta Mix, they are also slightly different.

In fact, if we were being really picky, these Pake-Taxo are just another Frito Lay’s / Sabritas snack mix reboot that simply combines preexisting snacks.  Similar to the likes of Cheetos Mix-Ups, Frito Lay’s Munchies, and Doritos Mixes.

And just like with all of those other mixes, the sum of those parts are not quite as delicious as the individual items themselves.

Sabritas Pake-Taxo Mezcladito are a fun mix consisting of a sort of weird combination of three different flavors of Fritos (chile y limón, sal y limon, chorizo chipotle), some Rancheritos (aka Sabritas “Doritos” Ranchero flavor), and Cheetos Spicy/Chili-Cheese Bolitas (aka cheese balls!).  Many of these different items we have tasted and reviewed individually.

For the most part the overall flavor theme sprinkled throughout this mixed bag is most definitely chile and lime, aka chile y limón.

It is blatantly apparent that the vastly abundant mix ingredient here are the Sabritones.  Seriously, easily half of the bag is made up of Sabritones’ puffed wheat based, chicharrones inspired, crunchy snacks.

The rest of the mix consists of a fairly even combination of the remaining components.  That being said, it was fairly difficult to distinguish the differences in flavor between the three Fritos.

We really can’t stand it when a mix cannot be enjoyed in a single harmonious handful.  And yet, the individual components themselves are still lip-smacking enough on their own that we did not have any problem crunching our way through this Pake-Taxo Mezcladito! 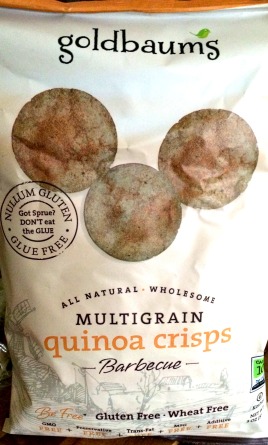 Another all natural, wholesome, gluten, wheat, and a handful of other things free, multigrain snack option from Goldbaum’s.

We’ve tasted an array of different “healthier” snack food options from Goldbaum’s now, and for the most part they been pretty good.

The quinoa crisps’ texture is just sort of……off, or off-putting, let’s say.  Kind of stale, with a soft crunch.

Goldbaum’s tries to redeem the crisps by dousing them with a heavy orangish-red seasoning coat, but it does not quite do the trick.

The barbecue seasoning blend reminds us of a Texas BBQ sauce that is heavy on the Hickory smoke essence.

The inclusion of paprika adds another smoky, and slightly sweet, note, while some sort of chili adds just a touch of peppery heat.

We recognize the necessity of these crunchy crisps in the snack market, but that doesn’t mean that we would be choosing them over tastier, more unhealthy, options.

Crisps provided to Chip Review by Goldbaum’s for review 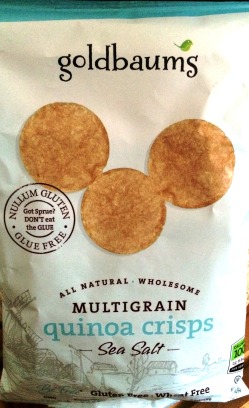 Crisps provided to Chip Review by Goldbaum’s for review 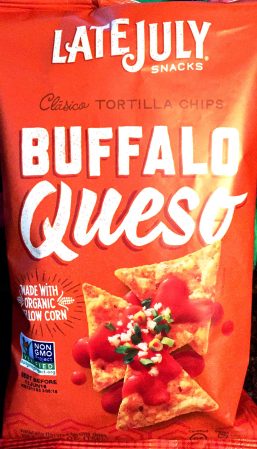 Okay Late July Snacks, we’re not exactly sure where it is that you are trying all of these odd flavored taco truck inspirations (Bacon Habanero – really?! or Sriracha Fresca – whoa!), but if those tacos taste anything like these tortilla chips (which are inspired by them) – well, then we need to get moving right away, and go give these taco trucks a try!  Ahhhh, who are we kidding?  We’re just going to stay put, and keep enjoying these chips instead!

That’s right Chip Review readers, Late July Snacks strikes again!  This time with their lip-smackingly delicious all new Buffalo Queso Clasico Tortilla Chips!!  And dare we say that these are our most favorite flavor to date.

First things first, we’re thinking that these chips should have probably been called QUESO Buffalo, instead of Buffalo Queso, as the cheese half of the equation is without a doubt the most pronounced and delicious aspect of this flavor combination.  In fact, these buffalo queso flavored chips are probably the first of their flavor kind that we have tasted sooo much cheese up front.  Typically the cheese plays second fiddle to the powerful buffalo ingredients, but not this time.  This time, queso takes the lead, and dominates the flavor show!  And that queso is all at once tangy, salty, creamy, a little funky, and of course delicious to the very last crunch.

As for the buffalo notes, they are certainly there, but they just aren’t quite as bold and overbearing as they typically are with buffalo sauce.  We taste a good amount of vinegar and garlic, mingling with just enough cayenne chili pepper, to trigger thoughts of buffalo sauce.  Honestly, these chips sort of remind us of the late great Doritos Blazin’ Buffalo & Ranch (only minus the ranch).  If we had one gripe with Late July’s buffalo though (which would probably be our only gripe with the chips at all), it would be that we wished they delivered a touch more heat.  A bit more burn – zip – pow!

But overall, WOW – these are just top notch tortilla chips!  Really flavorful, and really fantastic!  The flavors are bright, and not muddled.  We can actually taste and identify the multiple layers of flavor, including the superb corn tortilla chip.  You know what, these chips taste like light, fresh, crispy corn tortilla chips that have been slathered with a great melting cheese, and a deliciously, mild buffalo sauce.

If you see Late July Organic Chips in your neck of the woods, do yourself a favor and give them a try – all of them! 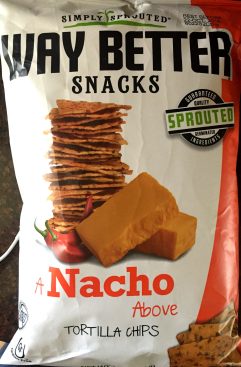 Yep, that’s right, just when you thought that you had gotten your fill of nacho flavored, healthier option chips – we’ve got this week’s second review!

Way Better Snacks (WBS) delivers some notably healthy deliciousness, but they aren’t quite up to the level of amazing that Beanfields Jalapeño Nacho Bean & Rice Chips delivered just days ago!

In all honesty we tasted these new WBS at the same sitting as we tried those Beanfield chips, and it wasn’t really fair to WBS.  Beanfield’s Jalapeño Nacho seasoning was so powerfully packed with flavor that they made these chips taste like they had no seasoning at all!

We’ve enjoyed about half of the offering we have tried from Way Better Snacks, and we would put these among that category.  There’s just something about those slightly sweet and seedy, sprouted tortilla chips that our taste buds really enjoy.

As for the ‘A Nacho Above’ seasoning, well, we stick by our initial tasting thoughts that this stuff is very, very subtle.  Only a light dusting of orange seasoning has been applied to the chips.  The seasoning tastes very much like cheddar cheese powder.  We really didn’t get any background seasoning notes, and certainly no level of nacho heat.

Overall though, the light cheese coating does jive very well with WBS’s naturally sweet and diversely textured tortilla chips.  We had no problem crunching our way through these, they just didn’t wow us in any way either. 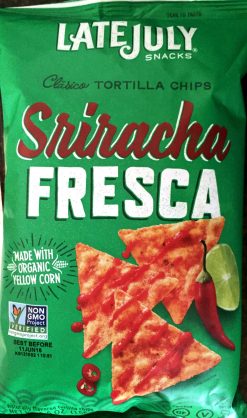 It was about a year ago this month when we first spotted Late July’s current bag design; which at that time was coinciding with the release of their Taco Truck inspired Clasico Tortilla Chips.  Both creations, the bags and the chips were pretty terrific.  We wrote the following words in regards to those newly designed bags, and those same words surely apply here with Late July’s latest aggressively green specimen!

Anyone who tries to tell you that appearance doesn’t matter is kidding themselves!  Appearance does matter, even when it comes to chips, and Late July Snacks really seems to understand this with the design of their new….bags!  Just look at that electric green bag to your left!  Eye catching isn’t it?  Great sense of style.  Bold, yet refined.  Simple, and yet so poignantly candid with their visual message that our mouths start salivating just by looking at the bag.

Sriracha Fresca?!  Hmmmm…..  fresh sriracha huh….?  We sort of doubt that these chips have been covered in freshly blended, Thai chili, sriracha hot sauce.  Wouldn’t that make the tortilla chips really soggy?  Either way, nit-picking aside, Sriracha Fresca is a perfectly acceptable flavor name variation of the popular flavor!  Late July being the latest of chip companies adding another mark to the ever growing list of sriracha flavored chips!

Sriracaha hot sauce really goes well with everything!  And, sriracha hot sauce flavored seasoning goes well with every crunchy snack as well!!  However, in our opinion, the snack food seasoning version does go best with potato chips, as opposed to tortilla chips or popcorn.  That being said, these are probably the most delicious sriracha flavored tortilla chips that we have tasted thus far.

For one reason or another the combination of corn tortilla chips, and sriracha’s slightly spicy, slightly sweet, and extra garlicky flavor notes always make us think of other tortilla chip flavors that already existed prior to SRIRACHA EVERYTHING – flavors like sweet & spicy chili, or sweet chili & red pepper.  In other words, they do not really offer up anything new to the chip game.  Late July’s version does offer the addition of lime juice (we’re assuming this is the fresca aspect), and we can appreciate the slight variation, but it is not nearly enough for us to say WOW! These chips have something very different about them!

Late July’s tortilla chips themselves are pretty fantastic!  Easily among the best tortilla chips out there.  In fact, these tortilla chips could even quite possibly be mistaken for a Doritos tortilla chip in a blind crunch test.  Light and crispy, with those lovely little air pockets that give our mouths some real enjoyment.  They also deliver a good amount of real ground corn flavor.

So, in the end, these new Sriracha Fresca tortilla chips are lip-smackingly eatable, but if you are looking for something that scream unfamiliar, or even makes you actually think of real sriracha from the bottle, then these probably aren’t it.

If you see Late July Organic Chips in your neck of the woods, do yourself a favor and give them a try – all of them! 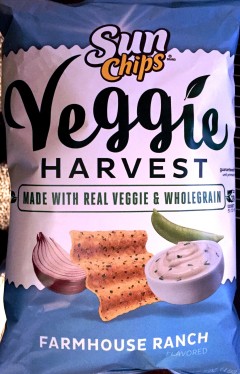 It has been a long time Sun Chips!  A long, long time since we reviewed any of your classic multigrain waves.

We’re pretty sure that we’ve said it before, but we’ll say it again, Sun Chips’ groundbreaking, and now iconic, multigrain chip texture, and shape, changed the way we looked at chips, and we will always love them dearly for that!

Sun Chips new ‘Veggie Harvest’ line of chips apparently are made with real veggies, in addition to the usual wholegrains.

Initial thoughts – these taste a lot, seriously a lot, like regular Sun Chips.  In other words, great news!

Believe it or not, the very first ingredient listed on the back of the bag – dried yellow peas.  DRIED YELLOW PEAS?!?  YUM, right?  Yeah right!  And yet somehow, these really just taste like any other Sun Chips.  Wow, very impressive.

If we were to nitpick about anything about the texture, then we might say that these chips have a slightly harder crunch than regular Sun Chips.  Maybe something about the baked peas provides a more dense and tough texture?

There is a lot-lot-lot of seasoning coating these chips.  Very salty, but also tasty. These chips are so heavily seasoned we are wondering if Sun Chips is perhaps trying to cover something else up??  Peas perhaps?

All the standard ranch flavors are present – garlic, sour cream, onion, dill.  It really tastes like ranch dressing.  FYI – this is not Sun Chips’ first venture into the ranch flavor field.  In fact, their original Peppercorn Ranch flavored chips are some of our most favorite Sun Chips of all-time!

Long story short, if you want to include more veggies into your chip diet then Sun Chips new ‘Veggie Harvest’ chips are lip-smacking way to do that!